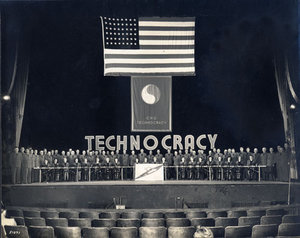 Nobody who knows me would call me a religious person. I’ve frequently engaged in conversations concerning the wisdom of incorporating non-secular thought into government and I’ve done it from a selfish desire to keep people from taking my liberties based on their religious beliefs. In return I’ve offered to do the same for them, which I consider a fair trade. I’ve made several friends during the course of my conversations on the topic and very few enemies. Occasionally I’ll run into someone who’s pretty darned sure they can inflict their belief system on me for my own good whether I like it or not, but generally those relationships don’t last.

While I’d like to say I’ve only encountered authoritarianism in the realm of “traditional” religious discourse, of late I’ve had to admit that isn’t the case. Several of the more animated public debates I’ve been involved in have concerned environmental policies ranging from the use of pesticides, nuclear power, global cooling, species protection and most recently global warming. While many of those conversations have been grounded in objective thought, increasingly they’ve taken on a familiar religious aspect that disturbs me. I’d like to explore that in this short monologue.

Science has always been the realm of objective evidence, rational hypothesis and supportable theory. Observation leads to hypothesis, hypothesis leads to testing, testing leads to theory, completeness and provability lead to law. Contrast this with traditional religious law, which typically begins with a declaration by an authority and proceeds to social enforcement, often skipping the hypothesis, theory and objective proof steps. Religious law is based on authority communicated on faith and obeyed under duress. There is no reasoning with a law based solely on authority; it’s a law because the believer says it is and it can’t be disproved or set aside in favor of a more accurate law through the use of reason, experiment or observation. In contrast, scientific laws may be revised based on new evidence, theories may be overturned by better explanations, and shotguns are discouraged as enforcement tools. In the scientific world a debate is never over and there are no ultimate winners of a scientific argument. Equally important is the fact that the number of scientists holding an opinion does not in any way make the opinion more or less true; thousands of scientists once believed Earth was the center of the universe and they were proven wrong by one man with a telescope. Science isn’t about democracy and consensus, though both have a known effect on funding and the direction of inquiry taken by investigators.

Lately I’ve heard several people declare the debate on Global Warming finished. I’ve repeatedly been offered “peer review” and “majority consensus” in defense of argument for implementing civil legislation. I’ve been told again and again that “this debate is over”. I’m left wondering if I’m talking with scientists or evangelists and I’ve concluded on several occasions I’m involved in a discussion with the latter.

I come to the sciences from a background in engineering, which loosely translates into my being someone who looks at science from an applications perspective. I am an empiricist, a person who uses the work of theorists to guide design of experiments that either prove or disprove theory based on direct observation. My training and experience is in the area of measurement theory, statistical methods and design of experiments. I am an internationally published author in those fields and my background qualifies me to critique the work of other scientists engaged in the application of those skills, including climatologists and paleo-climatologists. My work has been subject to peer review and I have served on the editorial board of the Oregon Workshop on Software Metrics, the Journal of Software Quality and IEEE Computer as a peer reviewer and technical editor.

I have reviewed the literature of Global Warming and Climate Change published over the past 25 years and I have what I believe to be justifiable questions. As of yet I have not found answers to those questions and I am seeking education on the topic. I offer these questions in the hope I will find legitimate answers to them and I’ll emphasize the word “legitimate”. I am not interested in contributions that quote consensus or authority; I would like qualified technical answers with references. I am also not interested in having anyone tell me the debate on global warming is over in ALL CAPS.

My central question concerns the accuracy and precision of the measurements used to develop climate models. From my reading there are three critical measurements necessary to support the theory of Anthropogenic Global Warming and they are Temperature, Atmospheric CO2 Fraction and Date of Observation.

Date of observation is important since it determines the resolution in time and also the precision with which two disjoint measures may be combined. If we use tree ring counts to give us the date of a measurement along with the temperature on that date, those data must then be accurately joined with measures of atmospheric CO2 taken from a different proxy, typically a measure of boron isotope decay found in the fossil shells of foraminifera gathered from sediment core samples.

What is the standard method used to date these measures and its precision?

Tree ring counts are frequently used as proxy date estimates yet I can find no reference that quantifies the standard error of these estimates. To the best of my knowledge carbon 14 dating is accurate +/- 700 years over the 26,000 year period it has been calibrated, with higher precisions of +/- 50 years available for measures taken in the recent past (before 1950 and approximately after 0 AD). TIMS dating, used to determine the age of samples older than 26,000 years apparently has a precision on the order of +/- 10,000 to 100,000 years depending again on the age of the sample.

With a precision of between +/- 50 to +/- 100,000 years, use of 14C and TIMS dating in the construction of models aimed at determining the effect of atmospheric CO2 on observed direct measures of temperature during the past 120 years is statistically impossible; the resolution of the dating technique is not sufficient, making the paleo-record useless in that application.

What is the standard error in tree ring temperature proxies expressed in degrees centigrade?

The majority of data used in climate research depends on the measured width of tree rings for various species as a proxy measure to estimate annual temperature. Where can I find a reference to the standard error by species? What is the standard error of estimate when data from multiple species are combined?

While tree ring temperature proxies have been calibrated over the 120 year period that direct instrument measures are available I have seen no discussion of their legitimate use beyond that calibration region.

Use of empirical regression models to determine the relationship between variables is statistically invalid when extrapolating beyond the model’s region as defined by observation. From literature, these proxies are being used to establish global temperatures at times well outside the model.

Research indicates that tree growth and annual tree ring widths are effected by both temperature and atmospheric CO2 fraction, confounding the measure of a dependent variable with an independent one. This violates a principal rule of experiment design.

In experiment design it is vital to either eliminate confounding or to block it. How has this been done?

What is the standard error of CO2 proxy measurement expressed in parts per million?

Literature cites the use of boron isotope decay as measured from the fossil shells of foraminifera recovered from sediment cores as the favored proxy for atmospheric CO2 fraction. Atmospheric CO2 fraction is therefore implied by a relation between it and dissolved oceanic CO2, which is further abstracted by boron isotope concentrations in the shells of fossil plankton. Error is introduced by each level of abstraction. What is the combined error?

During the time we have possessed the technology to measure the fraction of carbon dioxide in the earth’s atmosphere directly using instruments we have observed an increase of approximately 100 parts per million in that gas. If the proxy based estimates of historical CO2 are not accurate +/- half of that value (50 ppm), they are useless in the evaluation of the observed increase during the past century.

These questions and concerns are offered for education and debate. They are not presented as an indictment of the theory and it’s my hope they will result in a more complete understanding of the science behind the politics.

It’s important to remember that the theory of global warming might be valid after these questions are answered yet still be invalid as a method of predicting climate behavior over the course of the next century. Should it prove that the dating techniques used have insufficient resolution to predict events over a 100 year interval, we must discount any predictions made by those models in that timeframe. Similarly, should it be proved that the temperature and CO2 fraction proxies used by climatologists are not accurate to 1.5 degrees centigrade or 100 parts per million, we should discard them in any discussion of the significance of an observed 1.5 degree increase in global temperature that may result from a 100 ppm increase in atmospheric CO2 over the past century.

As I mentioned, I am not a climatologist but I am a citizen and I have enough of an education to ask these questions and understand their answers. Like many others, I am concerned about the risks of ignoring the theory and also the risk of wrong action based on a flawed theory or a theory based on flawed measurement. It wasn’t long ago that we were warned the world was on the verge of entering a new ice age and now the science of climatology has done an abrupt about face in a short 30 years. During that time we were also told not to eat chicken eggs, a position that was later reversed with little fanfare. If science was wrong before it can be wrong again.

Rachel Carson wrote a book and science declared a war on DDT, the cheapest and most effective tool the world had in the battle against malaria. After nearly three decades and the death of millions, Rachel was proven wrong. Consider this well when you evaluate the predictions presented to you on the subject of global warming because incorrect legislation might well kill millions if not billions of people. These are legitimate questions and they deserve a better answer than “the debate is over”.

Theocracy is the marriage of religious authority and the state. Technocracy is the government or control of society by an elite of technical experts. Neither one is good for liberty or the advancement of knowledge. I’ll propose that authoritarianism in all of its forms results directly from a real, or at least perceived, lack of knowledge.

Education is the root of the tree of Liberty. Lets get started.